Daimler Buses’ strategy is paying off: best return on sales in the industry of 6.2 percent

Stuttgart – In 2016, the bus division of the #daimler Group once again achieved the best return on sales in the industry of 6.2 percent (adjusted for special items), which is also slightly above its own target. Despite the continuation of very disparate markets, #daimler Buses increased its earnings by 28 percent to €258 million (2015: €202 million). The division’s earnings were therefore substantially higher than in the previous year. The strong business with complete buses in Western Europe made a significant contribution to this success. With approximately 3,000 buses delivered, the Setra brand actually posted record unit sales in 2016. This shows that the division’s strategy is paying off; #daimler Buses is very well positioned also in a difficult market environment.

Daimler Buses sold a total of 26,200 buses and bus chassis worldwide in 2016 (2015: 28,100). The bus division therefore successfully defended and in some cases extended its undisputed market leadership in its core markets in the segment for buses with a gross vehicle weight of over eight tons. Furthermore, new markets were entered, for example with exports from Brazil and India to Latin America, Africa, Asia and the Middle East.

Hartmut Schick, Head of #daimler Buses: “We at #daimler Buses are satisfied with our performance in 2016. We have achieved a lot, we are making good use of our strong position and we will invest a further 600 million euros in our bus division by 2018.”

“We will continue our offensive from this position of strength and will continually improve our organization. To these ends, we are systematically further developing our unique product portfolio and extending our technology leadership: with partially automated driving, with electric mobility and with digital connectivity. We want to offer optimal mobility solutions to our customers all over the world,” continued Schick. “In parallel, we are constantly optimizing our worldwide sales and service organization as well as our production network.”

Strength in traditional core markets, entry into new markets and international export strategy as the key to sustainable success

The main driver of the success of #daimler Buses in 2016 was the core market of Europe, where the strong business with complete buses paid off. #daimler Buses increased its unit sales in Europe (European Union, Switzerland and Norway) by about three percent to 8,800 vehicles (2015: 8,600). With a market share of approximately 30 percent, the division continues to be the number one in the European bus business by a clear margin. Sales of 1,700 units by BusStore, the brand for used vehicles in Europe, were at the level of the previous year.

In Germany, sales actually increased by ten percent to 3,100 units (2015: 2.800). A key factor here was the ongoing growth of the long-distance bus business. About 25.3 million travelers used this service in 2016. Of that total, 16.6 million were on journeys within Germany (plus 3.8 percent) and 8.7 million were on cross-border journeys (plus 19.2 percent), so the growth in cross-border traveling was far stronger. Experts anticipate moderate growth of the long-distance-bus market also in 2017, which should have a positive impact on #daimler Buses’ business.

As expected, the Brazilian bus market declined again in 2016. With contraction of 34 percent, it reached its lowest point for many years. Despite this difficult environment, Daimler’s bus division increased its market share by nearly 6 percent and is the undisputed market leader with a share of more than 58 percent. Furthermore,Brazil has developed into an important export hub for #daimler Buses. From Brazil alone, a total of more than 6,000 buses were exported to neighboring countries of Latin America such as Argentina, Chile and Peru, but also to the Middle East and North Africa, Asia and Africa. For its global business, #daimler Buses is making intelligent use of favorable exchange-rate effects arising from the weak real in Brazil.

India is playing an increasingly important role for #daimler Buses with entry into new markets. For just over a year now, the new plant in Chennai has been supplying customized school buses and complete buses to markets in the Middle East, Africa and Latin America. Approximately 430 units were exported last year. In addition, the plant of course also produces for the local market. About 500 buses were delivered to customers in India in the first full year of production.

“Our core markets Europe, Brazil, Argentina, Mexico and Turkey play a major part in the success of #daimler Buses. Obviously, we want to maintain our market leadership in those regions and I am very optimistic that we will succeed in doing so also this year,” said Hartmut Schick. “We are working with the same focus to expand our global presence and are looking closely at new markets. We plan to grow above all in emerging markets. We develop tailored solutions for each market while utilizing synergies in our worldwide production and sales network.”

The difficult situation in some bus markets is expected to continue in 2017. However, #daimler Buses assumes that the market has bottomed out in Argentina and Brazil. A significant recovery is expected especially in Brazil, although at a very low level. In Europe, #daimler Buses anticipates a slight increase in market volume compared with the previous year. On the whole, #daimler expects significant growth in unit sales along with a slight increase in operating profit in 2017.

Hartmut Schick: “We are confident that we will be able to slightly increase our operating profit from the ongoing business this year. To make sure we achieve that, we are systematically implementing our strategy. We are satisfying our customers with efficient vehicles, further extending our technology leadership, and developing integrated mobility solutions with our highly motivated team that will make our customers even more successful in the future.”

Daimler Buses’ success is based not only on its optimal global position for production and sales, but also of course on its technologically leading products – vehicles and services. Like no other supplier, #daimler Buses meets the individual requirements of the various markets and of its individual bus customers worldwide.

A clear technological highlight at #daimler Buses last year was the Mercedes-Benz Future Bus with CityPilot for partially automated driving. On its premiere journey in Amsterdam, the Future Bus drove 20 kilometers on roads with lots of curves on a BRT route (bus rapid transit, with a separate bus lane) without any mistakes and completely controlled by a computer. It recognized obstacles and braked automatically, stopped with centimeter precision at bus stops and communicated with stoplights. Early in the next decade, CityPilot is to go into series production as an assistance system to make public transport safer and more efficient. In parallel, the system will be systematically further developed for the specific application on urban BRT routes. In total, approximately 200 million euros will flow into the further development of city buses between 2016 and 2020.

Another focus at #daimler Buses is on making constant progress with drive concepts. As early as next year, Mercedes-Benz will put the fully electric city bus into series production. Prototypes are already on the road and intensive discussions of these new vehicles and specific customer requirements are already taking place with customers. These discussions involve experts from #daimler Buses’ new Mobility Solutions business unit, which advises customers on questions of electric mobility and connectivity. In this way, the optimal vehicle configuration can be identified and the bus can be exactly tailored for the topography of a city or region, especially with regard to battery capacity and charging infrastructure.

For the complete ecosystem connected with electric city buses, #daimler Buses also benefits from the high level of expertise within the #daimler Group, relating for example to the charging infrastructure and stationary energy storage as offered by Mercedes-Benz Energy GmbH. For the operators of city bus services, energy storage is an important factor for covering their vehicles’ high energy requirements. In early March, #daimler announced its acquisition of an interest in the US company ChargePoint, a supplier of battery-charging points. With more than 33,000 charging spots, ChargePoint is the market leader in the United States and has great expertise in the relevant hardware and software. This will be to the benefit also of #daimler Buses.

In numerous major European cities, the Mercedes-Benz Citaro city bus is in use as the NGT natural-gas version, with up to 10 percent lower CO2 emissions than the diesel version. Increasing numbers of municipal transportation companies are therefore gradually changing over to natural gas. In Madrid, more than 80 of these buses are already in use and another 240 are to be added by 2018. Citaro NGT buses are also operating on the roads of Oldenburg, Augsburg and Toulouse.

For routes with extremely high passenger numbers, Mercedes-Benz now offers an additional version of itsCapaCity large articulated bus. As well as the version with a length of 21 meters, the new version with a length of 19.7 meters is an attractive combination of maneuverability and spaciousness for 168 persons. It had its premiere in December on the roads of Vienna, where more than 60 of these new models will go into service this year. The 21-meter CapaCity is already in use in Hamburg and Dresden. In Brazil, a new chassis has been on the market since last year for a super articulated bus with capacity for 220 passengers. This is one of the world’s biggest articulated buses and is particularly suited for use in large BRT systems.

Connected services are another key technology for the bus business. At the IAA Commercial Vehicles trade fair in the fall of 2016, #daimler Buses presented the first stage of its Coach MediaRouter. This feature provides bus passengers with a Wi-Fi hotspot and a specially configured entertainment offering. It allows the passengers to watch movies and TV series, listen to music or exchange photographs. These features are a clear competitive advantage for bus customers in the excursion and travel market.

As a supplement to that, #daimler Buses offers its customers a unique service portfolio including the Servicepaket OMNIplus. In combination with the FleetBoard telematics application, OMNIPlus customers can carry out tele-diagnosis on the spot in the case of a breakdown. This saves time for customer service and significantly reduces vehicle downtime. No other manufacturer offers anything similar in this field.

Sales Milestone for Daimler Trucks in India: 100,000 BharatBenz Trucks on the Road 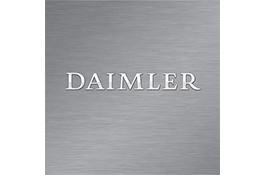